This is a typical day in the life of Johnny. Basically all he does all day long is try to copy exactly what his sister is doing. So he will gladly let her dress him up. He thinks he is so cool now but I imagine when he is 16 and I show him these pictures he is not going to think it is cool or funny at all!
Posted by Angi at 8:18 PM No comments: 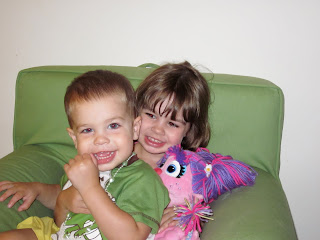 So even though we live in Florida we rarely go to the beach. It is really far for us and the novelty wore off long ago. So we decided last week to take the kids to the beach. Johnny has never been and Alexandra hasn't gone since we went to Greece. Nick and I were so excited. We thought this was a great idea and the kids were going to have so much fun. We couldn't have been more wrong. Alexandra liked the sand for about 45 minutes but she didn't want to go anywhere near the water. She didn't even want her toes in it. Johnny hated everything about it. He didn't want to go in the water and he didn't like the sand. He basically cried the entire time we were there because there was no way to keep sand off his body. He wanted to dig with his sister but he didn't want it touching him, obviously impossible to do! After an hour of Johnny crying non-stop we decided just to get out of there! So one day we'll try it again but for now we'll stick to the pool!
Posted by Angi at 1:09 PM No comments: