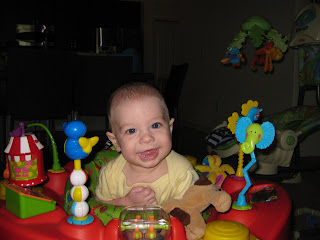 Johnny is finally able to go in his exersaucer now. He loves it. 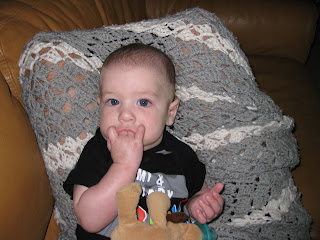 I for sure thought Johnny was going to be a thumbsucker like Alexandra. He doesn't suck his thumb, instead he sucks his middle and ring fingers to comfort himself and to go to sleep. It is too cute! 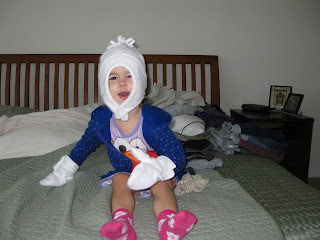 This day I told Alexandra that it was time to get dressed. She said okay and disappeared to her room. She came back with her sweatshirt, hat, mittens and socks and told me that it was cold out and she needed to wear this stuff. (It actually was 90 degrees out that day.) Luckily later that day when we actually had to go outside to go somewhere I was able to get the stuff off her without much of a fight.

Both kids are doing good. I started feeding Johnny cereal a couple of weeks ago. He still has no interest in it. When I bring it out he just stares at me and shuts his mouth. I have to play games to get him to open his mouth and then shove the spoon in there. Half the time he is still pushing it out with his tongue. Some bites I think he is actually swallowing it and I get excited and keep feeding him more. A few minutes later cereal starts coming out the corners of his mouth. He has been hiding it in his cheeks!!

Alexandra is still her busy self, learning to talk more and more everyday. Sometimes when she talks I look at her and think, where has the time gone, only two years ago you were a baby and now you are a little person trying to have a conversation with me!

I have a added a short video of Johnny up on all fours. He still is doing it all the time!
Posted by Angi at 12:44 PM No comments:

Not only do I dress myself I also do my own hair now when my Mommy lets me!

My new Elmo pjs my Mommy got me.  I love Elmo!

I have a sister and I love it!
People told me that the second baby tends to do things (such as sitting up, crawling, walking etc.) early because they have an older sibling they are constantly watching and wanting to do the same things as.  They weren't lying.  This past week Johnny has started to get himself up on all fours!  Alexandra started scooting at 6 months and was fully crawling at 7 months.  I could be wrong but I would imagine if he is getting himself up on all fours already at just 4 months he should be crawling by 6 months.   He is getting too big too fast!
Posted by niko at 5:19 PM 1 comment:

Johnny was 4 months old this past weekend!  We went to his four month doctor's appointment yesterday and he is a very big boy.  He is now 27 inches long (still in the 100th percentile) and 16 lbs (75th percentile).  This weekend I also noticed that his bottom two teeth broke through the gums. He has been drooling a lot but I thought it would still be a bit before any teeth made it through. I was wrong.  Alexandra started getting teeth early like this so I guess he is going to be the same.  These teeth didn't seem to bother him at all. Hopefully the rest will be this easy! We'll see if I'm that lucky.

This is one of Alexandra's outfits that she picked out to wear. You can't tell in the picture but she picked a shirt to wear with these blue leggings that is way too big for her. It is meant for her to wear when she is four.   She decided that her outfit wasn't quite finished and put a swimsuit coverup over it!  I just smiled and told her she looked pretty!
Posted by niko at 1:58 PM No comments: