Johnny got baptized this past Sunday. His godparents are Chris (Nick's sister) and Tim (my brother). Tim, Gina and Donovan came down for a long weekend for the event and my parents made a long trip out of it staying 12 days. We had a great time with everyone.

Johnny with his best bud Donovan this past weekend. It was so much fun seeing the two of them together. They were interested in each other way more than we thought they would be. 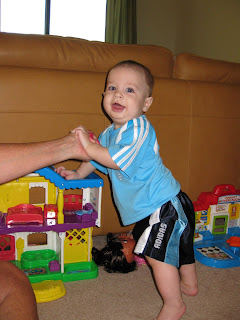 Now that Johnny has mastered crawling he is attempting to tackle pulling himself up to a standing position. Instead of trying to do it with the couch or a table he insists on using her toys such as her Little People House which provide no support. Many, many tumbles!

(I uploaded a bunch more pictures from the baptism and just hanging out with the Marcos and Grandma/Dietz in an album to the right.)
Posted by Angi at 1:53 PM